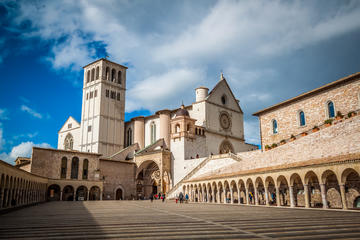 In the morning departure by private minibus to Florence. ( Journey time: approx. 2 hours). Meet your English speaking guide and full day dedicated to explore Florence. The  walking tour starts  from  the cathedral (exterior) in the old city center, including Giotto's bell tower, the Baptistery with its bronze doors and the famous cupola by Brunelleschi. A short walk brings you to the Accademia Gallery (*) which houses the statue of David by Michelangelo. Lunch at your own. In the afternoon tour begins visiting the old city center to see the Franciscan Church of Santa Croce (also the interior). A short walk through the heart of Florence brings you to the famous Piazza Signoria, where you can see the imposing Palazzo Vecchio (exterior) and the beautiful Loggia del Lanzi. Next you'll visit the Uffizi Gallery (*) to admire superb paintings by Botticelli, Michelangelo, Leonardo da Vinci, Raphael and Giotto. At the end way back to your accommodation.

In the morning meet your English Speaking guide and departure by private minibus to Perugia,  a land filled with beautiful art, fascinating historical sites and delicious local delicacies. The monumental center of Perugia is the Piazza IV November, an important focal point of the city since ancient Etruscan and Roman times, the piazza is still the center of city life today. Your guide will show you the beautiful medieval fountain, Fontana Maggiore, in the center of the Piazza, erected in the XII century by Nicola and Giovanni Pisano. It faces the wonderful Palazzo dei Priori, once the residence of the chief political authorities of the city and your next stop. You will also have time to explore the Galleria Nazionale dell'Umbria, the Collegio del Cambio with its fine Perugino frescoes, or the Sala del Collegio della Mercanzia with its wooden panels. Your last stop is the Cathedral of San Lorenzo an important example of Gothic architecture. Lunch on your own.

In the afternoon departure towards Assisi famous throughout the world as the native town of Saint Francis, patron saint not only of Italy, but also of animals and the environment. Assisi was added to UNESCO's World Heritage List in 2000.  Your first stop is the Basilica of St. Francis, painted by famous artists such as Giotto and Cimabue. Your guide will help you make sense of what you are viewing and enjoy the beauty that St. Francis inspired. After a short stroll, you will find yourself gazing upon the glow of pink marble of the Basilica of Santa Chiara. Inside this Basilica you will find more artistic treasures and frescoes as well as the sarcophagus of Saint Chiara in a below-ground crypt. From here, your guide will take you to lower Assisi to visit the Basilica of Santa Maria degli Angeli, an enormous cathedral that contains the small stone chapel where St. Francis accepted his vocation and renounced worldly possessions to live in poverty and purity. This chapel is one of the most sacred places on earth to the Franciscan order of monks. At the end way back to your accommodation.

In the morning meet your English Speaking guide and departure by private minibus to Todi a town, holding fantastic examples of Christian architecture and art. Todi emerges on a hilltop, a view right out of the 13th century; it is the birthplace of Jacopone, the mystic poet of the Laudi. The main attraction of the city is surely the Cathedral (11th century): it is a striking Gothic edifice on the Lombard plan, said to be erected over an ancient Roman building, probably a temple dedicated to Apollo. The church follows the plan of the Latin cross, with a nave and two aisles. The Palazzo del Popolo is a Lombard-Gothic construction already existing in 1213, and is one of the most ancient communal palaces in Italy. It is composed of two great halls: the "Sala Grande Inferiore", or "Sala delle Pietre", and the "Sala Grande Superiore", housing the city's Art Gallery. Todi's most striking church, however, is on the flank of the city hill, just outside the walls: the beautifully sited domed Renaissance church of Santa Maria della Consolazione (begun in 1508), often attributed, although without sufficient reason, to Bramante. Lunch on your own. After lunch departure to Orvieto.  One of the main sites of Orvieto is its cathedral, a massive building dating back from the year 1263. Orvieto's Gothic cathedral, which is one of the most celebrated in Italy, was begun in the 13th century to commemorate the miracle at Bolsena.  The interior of the building is richly decorated with the work of a number of medieval sculptors and painters, notably the frescoes by Luca Signorelli and Fra Angelico in the Cappella Nuova. Many 16th-century sculptures adorn the cathedral, which was completed in 1580. Another of Orvieto’s places of interest is the St. Patrick’s Well, (Pozzo di S. Patrizio). The well is 175 feet deep and 45 feet wide, impressing even modern day engineers. It is built in a winding, double-helix pattern. Why did this little hill town need such an impressive well? There’s a simple explanation. After Rome was sacked in 1527 by renegade troops of the Empire, the Pope fled to Orvieto. Once there, he noticed that there was not a water source at the top of the town, and he was worried that even little Orvieto might be attacked and unable to sit out a siege with no water. So a well must be built to settle the Pope’s nerves. The well was a huge project, begun in 1527 and finished 10 years later. As luck would have it, the town never was besieged, but the well was thought to have been a pretty good investment anyway, since with a water source, attackers would think twice about bothering Orvieto. The Sightseeing Tour allows you to explore these curiosities. At the end way back to your accommodation.

In the morning meet your English Speaking guide and departure by private minibus to Spello, which  is charmingly situated on the southernmost slope of Mount Subasio and opposite Assisi. The two towns share a similar pink colored stone aspect, the same alleys privacy and unexpected glimpses. Your guide will show you the marvelous  Church of Santa Maria Maggiore: Art casket for the simultaneous presence of some Perugino works, two paintings flanking the high altar, and Pinturicchio’s cycle of frescoes within the Cappella Bella, the three striking Roman gates: Consular, Venus and Urbica Gates. The city tour also includes the visit of the church of St. Andrew with Pinturicchio paintings, and the amazing itinerary  winding among the fourteenth century Palazzi until the upper Belvedere, which provides a fine view of the whole valley. The tour goes on towards Montefalco, known as the “balcony of Umbria”, which  lies in a panoramic position with splendid views over the Umbrian Valley. It has numerous  treasures of art and spirituality in its churches.

At the end stop in a beautiful winery  for a rich tasting ( inside an ancient cellar) of exquisite local products and famous wines as  the “Sagrantino”, the “Rosso di Montefalco” or “Grechetto”, typical of the hilly vineyards around the town. After tasting departure to Bevagna, a fairy tale hamlet. This little gem of a village is of Etruscan origin, and later was an important Roman town, which they called “Mevania”. You can still see the impressive  remnants of a 2nd Century Roman Amphitheatre and Temple, and the Roman Mosaics in the local museum are not to be missed. Most of what you will see in Bevagna however dates back to medieval times, giving it a romantic atmosphere. A maze of winding streets, most of which end up at the main piazza, the Piazza Silvestri, Bevagna is full of beautiful historical architecture. The Palazzo dei Consoli, for example, is a gothic masterpiece. At the end way back to your accommodation.

Meet your driver and departure by private minibus to Fiumicino airport.

Audio –guides : to avoid disturbing other people you’ll  listen the explanations of your E