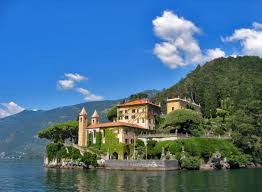 Arrival at Milano airport. Meet & greet. Transfer by private bus to the Lake Maggiore  and accommodation at your  4* hotel.

Buffet breakfast. Departure to Stresa by private bus. Meet your guide and embarkation on the boat to Isola Bella. Visit the baroque palace of the '600 and charming Italian garden which made the island famous in the world.  Built from 1632, the Palace and Gardens of Bella Isle, are the primary attraction of Lake Maggiore. The gardens form an extraordinary, flowered monument laid out over a series of ornate and overlapping terraces, a classic and inimitable example of seventeenth century "Italian garden". At the end the tour goes on to the Isola  Pescatori (Fisherman Island). It is occupied almost entirely by an antique, rustic, village, from the tortuous and narrow lanes and  preserves the flavour of old age. Lunch at typical restaurant. In the afternoon departure to Isola Madre, the largest of the Borromean  Islands. Its gardens, where all manner of peacocks, parrots and pheasants roam freely, are full of rare plants and exotic flowers, helping to create the charm of a tropical land. Isola Madre is particularly famous for its azalea, rhododendron, and camellia blossoms and also for rarities such  as a spectacular Kashmir cypress and palm Jubaeae Spectabilis that reached the venerable age of 125. Go back  to Stresa by boat and then by bus to the hotel. Dinner and overnight.

Buffet breakfast. Meet the guide and departure by private bus along the Piedmont side of Lake Maggiore crossing Locarno and Ascona (famouses for music and film events in the summer) to reach Lugano. Visit this beautiful city of Switzerland, lying on the banks of the homonymous lake. The pedestrian area, very suggestive, preserves the historical centre rich of marvellous buildings such as the Cathedral of S. Lorenzo and the Church of Santa Maria degli Angeli, whose interiors preserve the most famous renaissance fresco in the Switzerland, a Luini masterpiece. On the banks of the lake the park of the town, Parco Ciani, considered one of the most beautiful in the Switzerland.  Along the paths there are many rare and exotic plants. Lunch at your own. Departure towards Lake Como; arrival in Lenno to visit the splendid villa Balbianello (now owned by FAI, Environment Fund). Built for the Cardinal Angelo Maria Durini in the late eighteenth century, the villa stands on a promontory overlooking Lake Como, almost opposite Bellagio. The real masterpiece is the panoramic terraced garden dominated by the elegant loggia with three arches which stands on the highest point of the promontory. After the visit the tour goes on to Como. Accommodation at your 4* Hotel. Dinner and overnight.

Buffet breakfast. Meet the guide, embarkation and departure by boat for a cruise. The lake banks in Como are bordered by several villas of 18th century surrounded by marvellous gardens that are witnesses of the charm of the area during the centuries influencing painters and poets. Picturesque little stoned towns on the banks of the lake, where time seems has stopped to run. During the navigation, the guide will show the most suggestive points of the lake: Villa Olmo, Villa d’Este, Villa Balbianello, (owned by FAI, Italian Fund for Environment). Tour will go on by boat to Bellagio with the imposing Villa Serbelloni, lying in the highest part of the hill. Lunch at your own. In the afternoon stroll through the little streets and suggestive steps where there are interesting shops. Departure by boat toward Tremezzo to visit Villa Carlotta and its famous botanical garden. Then back by boat to the hotel for dinner and overnight.

Buffet breakfast. Departure by private coach to Sirmione. Arrival in the late morning and visit this beautiful town known for both its mild climate and the beauty of the landscape. Of particular interest: the remains of Roman villa, called "Grotte di Catullo," which is at the end of the peninsula. Lunch at your own. In the afternoon short cruise by private boat   around the peninsula with views from the lake of Villa Maria Callas, the Aquaria Wellness Spa, Grotte di Catullo;  panoramic view of Manerba Rock, Isle of Rabbits, the Isle of Garda and Torre San Marco. Landing in Gardone Riviera and short walk along the lake shore. Accommodation at your 4 *, dinner and overnight.

DAY 6: Buffet breakfast . Morning at leisure. In the afternoon private transfer to the airport.

RATES DO  NOT INCLUDE:

This programs are based on time-tables, exchanges, transport fees, ground services costs into force on January 2017. Any increase of the tariffs will be reflected in the price of services.